I spoke with Kelly of Mocha Momma fame about race issues in general, approaching the conversation, but also specifically in education. Kelly is an assistant Principal and has been an educator for years. She has first hand knowledge of how perceptions of race affect our youth. She has some really great discussions going on over at Mocha Momma. We’ve had some lengthy phone calls, but I’ve narrowed down what I’d really like to share with you all. Please see below, my interview with Kelly.

Is this everyone’s fight? Why?

I’m sure it is, but I think we first have to get past being able to talk about it. It’s uncomfortable and people love to say in their comfort zone, but too often the conversation gets stilted because it becomes a wait-I’m-not-racist when that’s not the issue. It wouldn’t *get* there if people were willing to do more listening to one another. To be honest, it needs to come from the people who want to claim so quickly that they’re not racist. Not enough listening is going on so we can’t get to the meat of things.

What is your first memory of injustice or racism? How did it shape your life?

I’m not sure how old I was but it was an age when I could still be carried by my father on his shoulders or have to hold his hand while we were out. This incident was especially painful because I recall how my dad looked when it happened. We were out getting ice cream and we walked to Baskin Robbins where there was a long line. I was on his hip and the white woman in front of us kept looking back at him. Most of the time I paid no attention to the stares, but in the late 70s we were still viewed as something to be gawked at so I got used to it later in life. I’m sure I was fussing at him and being a brat about what I wanted and he was telling me no in a stern, parental voice but the woman butted in because I looked much whiter than my black father so she took it upon herself to say something to him about talking to kids that didn’t belong to him in a ‘nasty tone’. He let her have it and I recall being afraid of this confrontation in a public place. In my small child mind I began to wonder if I did belong and that shaped my life profoundly. Where do I fit in? Where do I belong? Will I always feel like an outsider?

Can someone be racist if they have no first-hand experience with other races?

Of course they can. Especially if they watch tv, read books, and see the news. Racism is covertly displayed in all these things because of constantly perpetuated stereotypes in those places. When you only hear those things and finally come into contact with the other race, that is your baseline. How would a person who has never met a black person ever know that the stereotypes are just that unless their experience is broadened by experiencing other cultures? This question reminds me of when people tell me they don’t see color and I have such a problem with that. Here’s the thing…that story I told about my father shaped my whole world. You have to know that about me to understand a lot of things about the person I’ve become. Conversely, I have to know important things about people, too, and that’s where the listening, understanding, and paying attention to differences of color and culture come in to play.

What can educators do? What about truth in history books?

Some of the things educators can do are already being done like finally trying to seek teachers of different cultures to reflect student populations. You already know this about me, Leah, but I took my current position for that very reason because the student population had 40% black students and there wasn’t one black teacher there. I had to step out on some faith and be the first one to say this wasn’t okay if students only saw black adults in their building as janitors and security guards. While those are fine, respectable jobs, they need to see a variety. This year, we have two new black adults in educated positions and I feel really good about that.

As far as truth in history books goes, we are losing the battle because of who makes money here. On a small scale, we can look at good pieces like James W. Loewen’s “Lies My Teacher Told Me” and teach students to read critically and think about history with analytical and interpretive minds. For example, I found something recently from my alma mater that profiled a woman (she is white) who has a high profile job as a jury profiler. In the article it mentioned that she got a great education from doing a college project where she examined people at a country club and she said that it gave her a diverse background. While reading it I thought, “Country clubs are diverse? Since when?” and it seemed ridiculous to me. I wanted to take that article into the classroom and ask the students to see if they could read that critically when presented with information that doesn’t sit well with them.

On a larger scale, we have to look at textbook adoption. The big states that seem to run the textbook publishing companies have traditionally been Texas and California. Whatever they use is mass produced and mass published and many states look to see what they’re using, even if it’s a poor choice of text. I’m still not pleased with many history books that treat black history in a demeaning manner. It’s relegated to a chapter or unit and separated from the rest of American history. It’s frustrating because black history IS American history. Who drives that stuff? Why are cultures so separate in world history when it’s so melded together?

What do you hope to accomplish with your online writing? Do you feel you are doing it?

I just want to start a conversation where there has been no conversation before. I want to teach people, but I know I must be gentle in that quest. Some people don’t want to learn. They only want to argue their point and why they are right. And even still, some people don’t think I should be doing it or elevating myself to a status of feeling important enough to start this conversation. Mostly, I aimed at calling something out and that is this: We’re not really ready to talk about race. When people tell me that Stockett’s book “The Help” has been instrumental in doing that I have to call bullshit. No way. Black people have been having this conversation for a long, long time and the world has largely been ignoring it. But a white woman comes along who grew up with a black maid and all of a sudden white middle class women are suddenly comfortable with the conversation. There is something horribly wrong with that scenario. I have been wholly unprepared for the responses I’m getting for my part in the conversation, but something tells me that I am doing it. We are getting there. And “there” is where people from different cultures, backgrounds, ages, etc… are having this conversation together. That is my goal.

What do you think of the white savior issue? Where do you see it? How can we change it?

I’m sick of it. It’s a tired, lazy way of writing and expressing creativity and we see it everywhere. Movies, books, news. We can change it by first recognizing it because I have had recent conversations with educated people who still miss it. That critical thinking piece I was talking about with students needs to happen with adults. (and without the rage and passive aggression that I have recently seen on my own blog comments)

Is there a specific group of people that need to be educated more than others?

Yes. Everyone who vehemently defends where racism is not.

If there are different education needs for different groups, how can we facilitate that?

As an educator, I have had to ask myself what to do with a classroom full of students with varying backgrounds and ability levels. Do I focus on the lowest achievers because there is a sense of urgency? Do I stick with the largest group in the middle academic levels? Do I teach to the kids who are highly achieving and exceeding expectations? The answer is this: you teach to the top. You always have to teach to the top BUT you offer the supports other students need in getting there to reach the goals you have for the class.

In a case like The Help, should people see it to educate themselves?

Educate themselves about what? How white people view things? I think we’ve had enough of that. Didn’t that already happen with Gone With the Wind? Driving Miss Daisy? Dangerous Minds? Come on, we’ve seen that story before and if the goal was to “educate themselves” and it didn’t already happen then I don’t know when it will. How many more Magical Negro movies do we need? No, that movie shouldn’t be used because it’s lazy. It isn’t a story about black women and their voices that were eventually found. It’s a story about a white woman and the black maids are simply essential plot devices to the salvation of the white person’s soul. It’s more alienation than transcendence, but look at how many people want to defend it.

What is one thing, small and accomplishable, the people can do today?

Get out of their comfort zones and start asking more questions rather than offering trite answers. This includes everyone because we all have much to learn.

How are kids growing up today being shaped in terms of race? How will their generation will look at things?

Children are looking at race differently than my generation did. It stands to reason that this is true of every generation, but this one worries me in the sense that kids are actually seeing MORE stereotypes in media than I ever did as a child. Jersey Shore, Bad Girls Club, Real Housewives are really terrible in perpetuating stereotypes of Italian and Black people (and others, I’m sure) but I also see this happening in way too many things on Fox News and many conservative ideals of people I know who seem to be out of touch with culture in a way that is damaging to children. It scares me because I think it will be harder to break these racial barriers down. It’s something worth investigating when talking to children because I think their view of how they’ve been shaped is the key to better conversations about race.

Find Me On Patreon 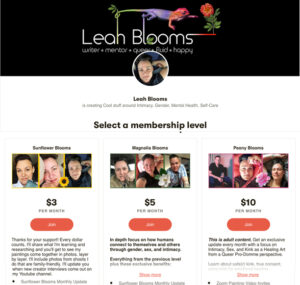 Come find me on Patreon! Be the first to know what I’m writing and creating, the stuff I’m ruminating on and learning, with tips about practical self-care and using healing arts to improve your life. Photos, writing, art, video – it’s all happening over there. (Plus the NSFW kinky stuff!)