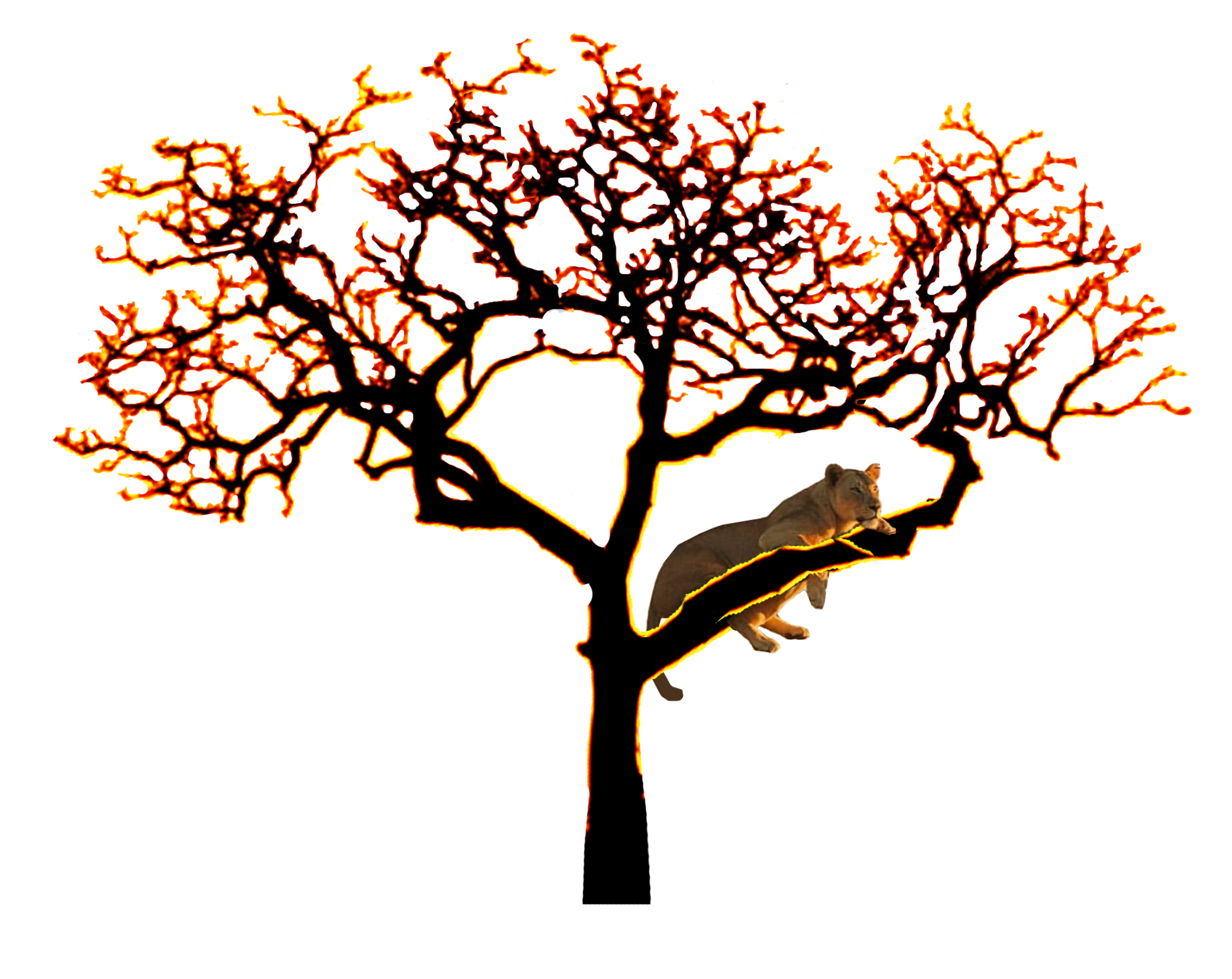 I walked and walked for ages and lifetimes, looking, searching. The light was more than half over. I prepared myself for the close of another day wherein my search failed. My eyes scanned around me methodically, left to right and back again. I had truly begun to give up hope when my eyes settled on a shape I thought I recognized against the dark sky. Maybe it’s him, my heart sang, and I walked in that direction, excitement pulsing outwards from my center until my body was a whirring metropolis of expectation and energy.

I heard the birds before I saw them. Their twittering was melodic and methodic and their song almost sounded like words. The starlings called to me and I walked towards them, carefully putting one foot in front of the other until I found myself standing in front of a Marula tree.

I stood still and let him look me over in the late afternoon sun. His gaze penetrated my bones. He was kind. He was good. And he was going to accept me or I would die because without him, there was nothing I wanted in this life or any other.

I tried to quiet my clamoring heart, which was beating too hard. I was sure he could hear it and it would somehow count against me. Pulling air slowly through my nose and pushing it out of my mouth to calm myself, my breath caught and sounded jagged. I suddenly realized I was bookended by tightly balled fists, one on each side of my body, and I intentionally tried to relax my hands, finger by finger, coaxing each one to unhinge from the invisible magnet in my palm that held them fast, until they hung like clumps of wet, limp mop strands.

And still, he said nothing.

My mind began to race. Was I missing something I should be doing? Maybe I should reach out and touch his bark? Recite some poetry? Boast of some of my good deeds? Better and more honest: admit all my failings, one by one, until my soul was bare?

Hot tears stung my eyes and I closed them, understanding that I had failed somehow. I hung my head.

I felt a branch slide under my chin and tip my face up. I opened my eyes.

He looked at me, deeply, and I dared to look back, my wet cheeks quickly drying.

His branches began to move and adjust, swinging closer. He moved his many arms around me, several doing things at once.

One thinner arm, which tapered to a fine point, wrapped itself around my left wrist. It kept wrapping and wrapping, pressing each layer tightly to the previous one, until it covered up about a two-inch length of my arm, pressing and pressing tighter and tighter, until it was impossible to see my skin between the layers. With a crack, the branch broke itself off, leaving a wooden cuff behind. The colors of the layers varied from each other, some caramel, some cocoa, with a smoothed, knobby texture.

At the same time, a few heavier branches gently turned me around so my back was to my Marula tree, which at one point required my left arm to raise up as I went under his outstretched arms. It felt a bit like a dance.

As I was turned, branches wrapped around my neck, circling three times, and weaving themselves in and out and around each other, creating a type of wooden linked necklace. A small silver disk about the size of a half-dollar rolled along upper branches towards me, glinting in the aging sunlight, and finally slid into place. The pendant hung just below my clavicle and a branch came close, its tip fiery yellow, orange, and red, and engraved an image of the tree himself into the silver.

A branch snaked its way along my left shoulder, pausing for moment at my neck where my jacket’s collar rested just below my hairline, and after deftly finding the opening, plunged its way smoothly against my skin along my right shoulder and down my right arm, shooting out my sleeve cuff, pressing itself against my palm, my fingers automatically grasping as it went through my fingers, and kept reaching downward until it met the ground next to the outside edge of my boot. I felt more than heard the crack of the branch breaking itself off near my wrist, quickly removing itself from my body, leaving behind a walking stick. Thin metal rivulets grew from the bronzed handle in my hand, snaking their way, following the natural curves of the wood, filling in divots and dry river beds which appeared to be carved into the staff, until the entire piece was smooth and even. It was the most beautiful cane I’d ever seen.

The starlings tripped down to my shoulders, flashing lilac and deep ocean and morning sunrise skies on their bellies and wings, chirping and singing around my head. They kissed my cheeks, whispering secrets in my ears, promising good things and happiness and strength in a language I couldn’t make out, but that I completely understood.

I felt my backpack being removed. I dropped my shoulders and helped ease it off, transferring the cane from one hand to the other, then watched the tree bring my pack around and place it in my arms, flat and long, the front facing up where I could clearly see the scuffs, rips, and holes this journey had caused. The metallic, iridescent, blue-green-purple birds walked down to my elbows towards my hands, doing a bit of a dance to each other, opening and closing their wings rhythmically, passing their feathers close to my backpack on either side, crossing each other’s outspread wings, pulling them back in, hopping and walking, until they suddenly bowed to each other and flew back to him, peppering his arms and head with shimmering dots in colors of eggplants and morning glories and deep forest grasses.

My backpack was iridescent like the starlings, who had gifted me their colors and feathers. I moved my bag slightly to catch the colors moving like waves, marveling at it’s beauty. I noticed a new wooden zipper pull replacing the safety pin I’d put on a few weeks ago when the original one broke off. My Marula tree waited for me to fully see the beauty of the starling’s feathers which had been layered over each other tightly in such a way that I knew would be waterproof. I turned back towards him and when I finally raised my eyes to look at him and say thank you, he picked up the backpack and brought it towards him. He carefully held it, inspecting it, and when he was quite satisfied, pulled it close and kissed it. When he brought it back to me, there was a wooden medallion in the center of the feathers, forged from his lips and breath. The design of the medallion was intricate, with jagged mountains and roots and sky intertwined.

I wanted to say thank you. I wanted to share the relief I felt at being accepted and wanted. I needed to explain that belonging to him was everything I’d ever wanted.

Before I could speak, a nearby boulder uprooted itself and rolled over to where I stood. The boulder shook itself back and forth, breaking up the dirt below it, and settling itself into the earth directly behind where I stood, flattish side up, providing a place for me to sit. I sat, and as I placed my pack against the boulder near my feet and the walking stick next to it, I became aware that we weren’t alone. Someone was just behind me, waiting, watching, in the now darkening, dusky light. I sat still.

Suddenly, the birds scattered, resettling on the uppermost branches, as the lioness launched herself over me. I felt her breath on my neck as her body leapt just inches over my head, her front claws then ruthlessly grabbing the trunk as she pulled her heavy, lower haunches up, hugging and gripping her way to the thick, awaiting branch. She stretched herself out, looking lazy and languid under hooded eyes. Only her occasional muscle twitches relayed her readiness to pounce at any moment. Her claws flexed out just enough to show off their sharp tips before gliding slowly back inside velvet pads.

Just before the sun dipped below the distant hills, the salmon sunset reached across the skies and set the tree on fire. The tips of my Marula tree, reaching towards the heavens, appeared to be lit from within, glowing warm and melting away any final worries I had like candle wax. His arms slowly moved with the dance of the evening, starlings settling in for the night, giving way to the night watch.

The eyes of my lioness burned golden.