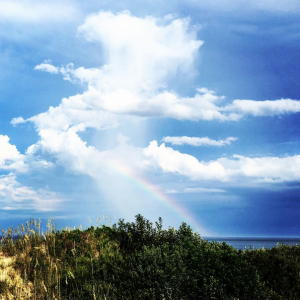 This past year or so I’ve been trying to find the gifts in whatever life hands me. When I’m stuck in traffic, maybe it’s that I got to hear something really great on NPR before I reached my destination. If I dropped and shattered a favorite heirloom glass serving bowl, maybe it’s that when I swept the floor I found the missing earring I’ve been looking for under the fridge. You get the idea. The game is thus: can I find the gift no matter how deeply it’s hidden, because I really and truly have to believe in a God that cares about me so much, He would only give me a trauma wherein a gift is hidden just for me. Otherwise, I don’t think I could do this Life.

When I meditate in the mornings, I frequently have an old trauma come forward in my consciousness. It will be something from when I was young and vulnerable. Abuse of all kinds. Situations where I’ve been holding on to guilt and shame and anger. Most of them I felt like I’d already dealt with and let go, but I stopped being surprised to see them months ago. And what I’m learning is that I can’t really fully release them until I find the gift, even if I’ve dealt with the trauma. And with some of the stuff? It’s hard. HARD. Finding a gift when someone has sexually assaulted you is a tall order, my friend. But so far, in my own experience, it can be done. It may not be fast. It is definitely not easy. And who knows, I may run into one in the future that takes the rest of my life, but it won’t stop me from trying because the pay off is worth it. And just in case it’s not clear, this gift is NOT in any way from the person who perpetrated the crime. That person did not do me any favors in harming me. No. It’s just that my God is so powerful, He can turn anything for good on my behalf.

Which brings me to this election cycle and this past few months in particular. In case you don’t know who I am, I’ll sketch it for you.

I’m the most white woman possible coming in at 100% European octane, who has been in relationships previously with women and believes in marriage equality and safe living for all, and who fell in love with a half-Mexican man. I was abused and assaulted by those I knew and some I didn’t starting before age four. I went through most of my life challenged with mental health issues like bipolar and DID [ I was a consultant for the Showtime series, United States of Tara ] and I am a passionate mental health advocate. I have physical issues like Lupus. I’m a mother to four children and have two grandchildren. I was raised in an LDS family, left the church for about twenty years, and then came back to it about two years ago. I live in California in a warm seat of liberals with a local economy that does alright and even though I was raised by an ultra-conservative father who sent me to John Birch camp one summer, I lean more left than center in most things. My husband has a full-time job with benefits which makes it possible for me to work from home on a part-time basis mentoring and doing energy work for others who have compound physical and mental challenges. I also write, shoot photos, make jewelry, paint, and do pretty much any craft that exists.

Between my husband and myself, we have a lot of family, including many minority and gay family members and friends who live all across the country. We mostly live paycheck to paycheck but have modest 401Ks. We have three month’s food storage smack dab in my bedroom requiring me to get in bed by crawling over canned goods because we live in a tiny condo and there’s no other place to put it. We will not have a gun in our home. Neither of us has a Bachelor’s degree but two of our kids do and one will soon and the other one doesn’t seem to need one because he’s already making more per year than we do by a very large margin. We don’t care about material things and are usually late adopters. The largest TV we’ve ever owned is so small you can’t read the questions on the screen when you watch The Chase.

I volunteer for my church on a weekly basis and can’t imagine my life now without it, although I’m also deeply conflicted about multiple beliefs that are held by most members. I hate crowds and having conversations that mean nothing. I’d prefer an afternoon on my couch reading, snuggled up to Joe instead of heading to a fancy party. I’ve been known to be awkward in public settings because I have a hard time regulating my language if someone says or does something that rubs up against what I consider imperative like protecting the underdog or exhibiting blatant racism, misogyny, xenophobia, or anything that implies that person thinks they are better than any other person on the planet. I’m getting better at picking it up when it’s not so blatant.

That means that this past year I’ve been repeatedly hit by Donald Trump and his words and promises. I’ve been in fear. I’ve been angry. I’ve been confused. I’ve been worried about my friends and family that aren’t white and straight. I’ve been worried about the future and what it means for someone like me with preexisting health issues and how protected I need to be walking down the street alone because my body is now not my own and is open season for leering men who want to grab me and assault me (which is how minority people have felt for, oh, ever.). And I’ve been wondering how to just forget all the things Trump said he’d do now that he’s going to be the president like so many people suggest because of course HE’S NOT REALLY GOING TO DO any of those things (but I don’t believe that) and I’ve been wondering how it’s possible to expect all the people who are now committing violence in his name to just stop because he says to, IF he says to.

These are not hypothetical worries I have. They are very real. And I’m that 100% creamy mayo white lady living in the lap of liberal territory. I can’t imagine how my Muslim immigrant friends feel or my Mexican and Black family and friends in red states feel or my LGBTQ and Latinx friends feel who married someone of the same gender or simply hope to use a bathroom in a public place without getting beaten up. And what keeps me up at night are the thoughts about how this is trickling down into our youth. The stories of what the kids are doing to the other kids at school. I mean, you remember school, right? It’s a nightmare even when you’re popular and the going is good. Imagine how those kids are feeling. (And then donate to Kelly‘s Being Black at School because they are doing the work.)

Circling back to the beginning of my post –> where is the gift? That’s what I go to sleep asking my God. Where is the gift in this? And He didn’t answer. For months I’ve been asking and frustrated and angry because it felt like He wasn’t playing by the rules.

Election night, as Joe and our son, Tony, and I watched the election results come in, it was about the time Florida kept going back and forth that I realized, I mean, it HIT me, Trump could win this. The only hope I’d had for months was that Trump was about to get his hat handed to him with a thorough trouncing and then things would go back to normal. I needed that so bad.

Normal is not coming. It’s not happening. Normal doesn’t exist anymore and I don’t think it ever did but I didn’t know that in my bubble. All my worst fears came true. Trump won and reports of violence started pouring in. It was like someone took the cap off the slow leak of terrible things that had been happening and everything burst out. Conservatives pretty much across the board had one of three things to say: 1. Stop complaining. 2. Things are not that bad. 3. Voting for Trump doesn’t make me racist. Minority liberals had one thing to say: 1. I’m terrified.

Over the past three days I’ve been in a crash course of learning what I didn’t know. Normal for me looked like living in a bubble of information that I already knew. It meant not having important conversations with the conservative members of my family to see how they felt. It meant not looking deeply into why so many people in the middle states were hurting. It meant discounting the importance of listening to my minority friends who had been worried for MONTHS that this was going to turn out bad. It meant looking at everything through a simplistic telescope. It meant being slightly smug that I was smarter or “got it” and those in the red states didn’t. It meant being able to lie to myself that I knew everything would turn out how I wanted it to. Needed it to.

And then, that is not how it went down.

Joe and I wept that night and off and on the next day and the next day and even today. We listen to someone elses story, witness their pain and grief, and feel that connection that only comes from surviving trauma. Make no mistake about it, this has been a PTSD experience for thousands. This is severe trauma that taps into survival fears. The Flight/Fight response. People are fighting for their lives.

But there’s been a gradation of grief that has begun to dissipate from time to time and every now and again something extraordinary happens. I find a gift. I realized today that I had a few I could list and as I started listing, more and more came. It was as if my God was saying, “Hey there. Here’s your gifts. You thought you would just get one or two? Sillyhead.”

That’s often how it goes. He gives me way more than I was expecting.

None of these things changes the situation at large. Nothing I’ve learned makes it easier for anyone else. It only changes what’s happening inside me, but with those changes I can come from a place of peace and that might be helpful to others while they navigate this tricky and deeply upsetting terrain.

I believe real conversations are the only ones worth having, and I intend to make as many of them go as deep as I possibly can. It’s going to take a long time to release all the trauma that’s happened, not just for me but for so many this past year, especially because it’s ongoing. I have hope I can do my part now because of receiving so many gifts with which to process it all. I’ll keep waiting on the Lord, but I’m also going to do everything within my power to help those around me. It’s a sacred responsibility.