Skip to Content
Home Blog flawed but authentic Being Yourself
by 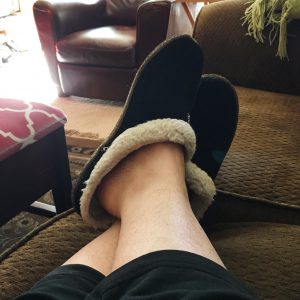 I’ve been thinking a lot about what it means to be yourself, to own who you are, since I wrote my last post. I’ve heard from several people who have asked some variation of, “Yes, but *how* do I start being who I want to be and not who I’ve been acting like?”

I don’t know that I have the magic answer, but I do have some ideas to share, as I sit here on the couch in my yoga pants and slippers, unshowered as of yet at 11am on a Wednesday.

Maybe it’s time to sit with being uncomfortable. Change, most of the time, means not being in comfort. Be willing to just stay there and prune in the juices of discomfort.

What if every moment when it comes to the center of your thoughts, you think, “Am I acting/behaving like who I really am right now?” Would you be able to change something, maybe a thought or a word, to be more real?

What if we started by looking at others with less judgement, allowing them to evolve into who they are without us already thinking we know everything about them, wouldn’t that make it easier for us to evolve, too?

I think most of us are just trying to fill the suit we’ve got on. It sometimes doesn’t fit very well, but it’s what others expect us to be wearing, and so we comply. We keep pushing up the sleeves and rolling up the hems and taping the buttons closed on the inside to get rid of the weird gap thing that happens across the chest or slightly unbuttoning the last button because it’s just a little too snug across the hips or using an elastic band to extend the too-small waistband or piling on layer after layer to hide underneath. I look around the room and I see a lot of people wearing a lot of pretend suits (Me, included.) and only a sparing few who come across as the person they really feel like inside.

I stopped shaving. First I stopped shaving under my arms. My pits had been turning darker and darker for a few years and the doctor told me that although it was “ugly” (his words), it wasn’t harmful and probably due to a reaction from my deodorant or maybe a bacteria, he wasn’t sure. It looked kind of like large birthmarks under each arm. He told me that every time you shave, you open yourself up to a bacteria imbalance. I read that it could be an hormonal imbalance (most likely in my case). I was developing small, hard nodules in my lymph system and I wanted to see if I could encourage them and the dark spots to go away by not shaving and instead using coconut oil in my pits. So I stopped using any kind of deodorant and I stopped shaving on the same day about 18 months ago. Scientists will tell you that it was a terrible idea to do both at the same time because now I’ll never know which one worked, but the hard nodules are gone, as is the darker skin.

After about a year I wondered why I shaved anywhere on my body. What’s wrong with hair on girls, anyway? I did a little research about the history of women shaving and decided that if I couldn’t come up with a compelling reason to keep shaving my body, I was going to just stop. Did I love doing it? Did I love the way it looked? Did it make me feel more beautiful? Was there some medical reason to keep doing it? Who am I hoping notices and why?

So, I did stop shaving last May and so far hardly anyone has said anything to me about it. But, I’m more aware. I wear long skirts, but I did that anyway, but now I feel it more, you know? I don’t go get a pedicure at the place down the road anymore because last time, the lady doing mine made a joke and I didn’t know what to say back. It’s a little uncomfortable to be in this skin, but it feels more real to me and like I’m being more myself than before, so I stick with it.

I tell you all of this because it’s part of sitting with myself and being who I am. I’m pruning. Do I feel ugly or pretty and why does it matter if there is hair on my legs? Do I want someone else to see my legs and comment? Is it just to fit in? If I don’t fit it, what does that say about me? What if other people think I’m ugly? Why do I care? Do I care if other women (or men) have legs/arms/faces that are shaved or not? Am I judging them on something so superficial? If so, why? (This woman with a beard is pretty amazing.)

I think what I’m hoping is to be ok with me just as I am. Not later, when I’ve shaved or put on makeup or dressed up or lost weight or fit in with the cool kids or earned a degree or done something else spectacular, but NOW. I want to just be ok right this second, sitting in my own skin and not someone else’s idea of the suit I should be wearing or my idea of the suit I’m guessing the other person wants me to wear. I want to feel happy and satisfied to be me while I own all my faults and all the stuff that I’d like to change and all the stuff that’s good about me, too. I’m just me no matter what and I guess I got super tired of pretending anything else.

I’m not saying everyone should stop shaving in order to be themselves. I’m suggesting that you might be doing or saying things that aren’t really who you feel like you are inside, because you think others expect it. Maybe take a look at that and dare to sit in the uncomfortable moment and feel.